An important part of growing as a photographer is shooting personal projects. For food photographers, it’s very easy to get caught in a rut because you’ve taken the same modern image over and over again. An easy and important way to counter this is to shoot food as art.

In essence, food photos are still photos. I think it is important to go back in time and learn a still life expert. Especially if you really want to learn the artistry of capturing stories and emotions in food images, Baroque and Romantic art painters. After studying them for a while, use past images to stimulate the current image. Also, if you need to copy them to understand the techniques, that’s fine too. Don’t go sell them.

There are four areas to improve by looking at the past to improve the present.

If you are interested in shooting food, it is important to have a deep knowledge of directional lighting with one light source. Unless I’m using cucoloris or a card to change the sunlight in some way, I’m not talking about available lights such as the sun. The important reason is that you can create exciting images in any situation with just an off-camera flash and a DIY modifier that knocks out ambient lighting.

This type of lighting also produces the greatest hunger response when displaying food images. It provokes an evolutionary reaction that has taken root in us. Especially when the intensity and direction of lighting mimics the intensity and direction of sunlight during the period in which we normally consume food throughout the history of evolution. The way we react to food is first.

Not only did the old painters know this, but the lighting when painting and eating indoors was also very limited. And the position of light with respect to food that has changed throughout the day is also very important. If I’m sitting at the kitchen table, the lights are on my left side in the morning, lunch is in front of me, and dinner is on my right side. This varies for everyone in response to many factors, but each still evokes its main reaction. I rarely eat in the light behind me. This is one of many reasons why food images shouldn’t be lit up in the foreground.

Pieter Claesz, one of the Dutch painters I love to study, is good at telling stories and evoking emotions using one light source directional lighting modified in his still life. ..

I first got this technique when I took an image of a chicken korma. This is to change the directional lighting of one light source to tell the story and make you feel the warmth you feel when you eat. The plate, and the emotions of this plate are relayed.

2. Deepen your understanding of the emotional color palette

Often when we think of Baroque and Romantic painters, we think of European greats. However, Robert Sheldon Duncanson is the best-known American Romantic painter in his landscape. However, he also used the Baroque color palette and emotional arousal to paint some still lifes of food without injecting religious or political stories into the paintings. rice field.

Lighting also tended to be more diffuse and uniform, but still directional. What we study with these images of both eras is to use warm and cold tones to create the mood. Modern color theory tells food photographers to use cool backgrounds and props with warm-colored foods, as they cause food to pop out of the image. You may also have heard or read about the need to find a balance and the creation of separations. But if you look at the classics, especially Duncanson’s paintings of this fruit, how cool and warm tones are mixed throughout the subject to create emotion and look at the complex “hero” as a whole. understand.

The image on my charcuterie board was the first attempt to use this technique, but the results were a pleasant surprise. It was also the first image that succeeded in creating my own style that was always in my head, but it was really hard to make it with the camera. By studying the lighting techniques and color palettes of these artists, I was able to break through that creative barrier.

3. Extend the configuration beyond the rule of thirds

The rule of thirds is a great place to start when learning all types of photography. However, when it comes to food photos, it produces images of food with the strongest diagonals, especially the golden triangles. Everyone talks about image movement, but people have a hard time understanding movement in relation to still images. For still images, it is very important to look at the entire image without disturbing the “hero”.

Let’s go back to the Dutch painter and see the still life of Jan Davidsz de Hem. Many of his works contain one large triangle with a negative space. However, if you look closely, you can see that the Golden Triangle is used. The center of interest begins around the intersection of the diagonal and intersecting lines that extend from the upper left corner to the lower left to the upper right. Dehem also placed the lobster on its perfect diagonal, with his claws pointing down toward the center of interest and the figs facing up. But if you take a closer look, there are many triangles in this image, all of which guide your eyes through different micro-stories.

I love triangles, especially golden triangles, in my work. My fine art photo below, “Before The Fires” Is another example of an image that uses a modified single light source directional lighting, cool and warm colors across the main subject area, and a golden triangle with negative space. When I first took this image, my motivation was to be romantic and to evoke the joy that comes when all the local fruits are available in stores and farmers markets here in British Columbia early in the summer. The day after this image was taken, all the cherries in the orchard were cooked in the trees and turned into baroque images as they captured the moment just before the wildfire burned Lytton, British Columbia. 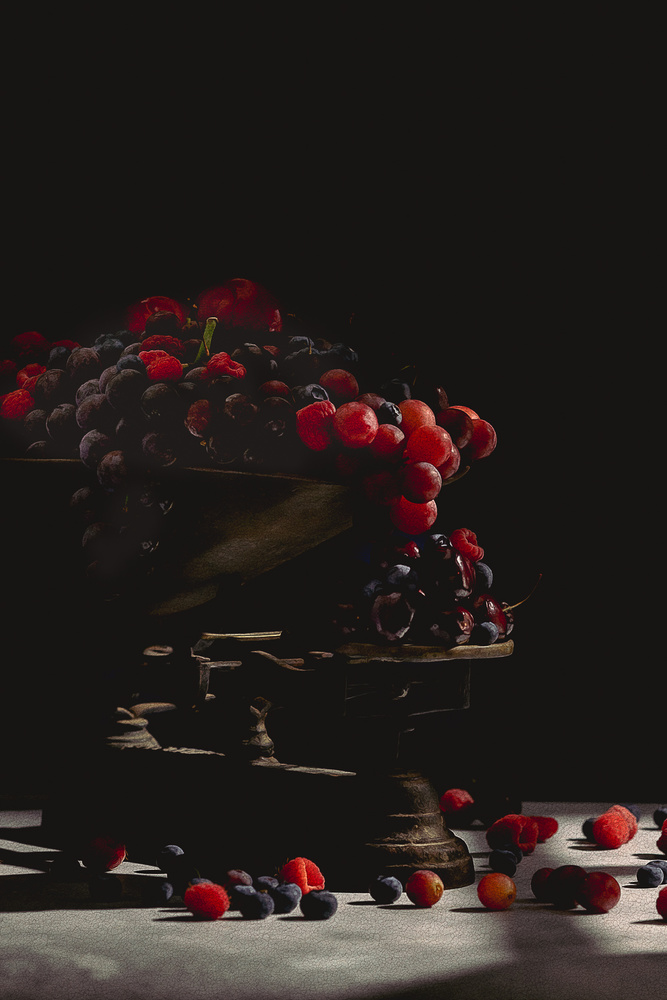 4. You really shoot the nail in the camera

When working in commercial food photography, clients usually approve images on the fly. As a result, you need to do most of the work in-camera and create Lightroom presets that work for most images so your clients know exactly what your final color-corrected image will look like. I have. We also need to worry about the truth of advertising, so we want to reduce the use of Photoshop and find the removal of crumbs and highlights from props that we missed during the styling phase.

When taking fine art photos, you can take advantage of Photoshop, such as applying crackle layers and oil painting filters, as you did in “Before the Fire.” To make it look like an old picture. That was all that was done in Photoshop. The rest was done in the camera.

Commercial food photography is another animal due to the client’s situation and advertising law. Many baroque and romantic still life painters also fall into realism. By practicing the above three points, you will not be able to use Lightroom as a darkroom to do most of the work in the camera right away.

Hope this helps you to be more creative with your food photos and overcome the ruts. Is there a particular era of painting that affects your photography?

All classic paintings used in this article are in the public domain.